Kobo, Sony, and other Retailers/Devices

Paperback and EBook copies available on both BN and Amazon, also can purchase on this website.

Roya Whitmore has never had dreams like this before. Could her husband, Solomon, be cheating on her, after three kids and another on the way? More dreams come, and the events of her everyday life begin to match the events foretold in her dreams. As they do, she sees a path of faith and resilience that she never realized existed.

She joins the Alliance Crusaders for Christ, founded by her pastor, Isaiah Williams. She learns that their stated purpose as evangelists is only part of a deeper mission, to prepare the Church to survive the last days.

Throughout this series of apocalyptic novels, there will be references to things you know to be true, and extrapolations to things that are likely to occur. This first book of the Miss the Mark Series places, in a fictional setting, things that do occur in the lives of people who follow Christ, along with miracles and gifts from God. We are never perfect, but we know the One who guides our lives.

Accept cashier check, money order, and personal checks have to clear before mailing your copy.

"Sin came into the world through one person, and death came through sin. So death spread to everyone, because everyone sinned" (Romans 5:12, GW).

Chief commanding officer, Les Blanche's presence alarmed the Task Force Special Operations officers and soldiers to halt and salute their leader. He stood near the sound booth and stared at the HD screens in front of him. He pressed one of the buttons to playback a report of a CNN broadcast of Salvator Lothar. Les surveyed the room and studied the facial expressions and slight gestures of the men and women as they watched the shortened video on the devastating events of world destruction. Les sought after an immense outcome. He carefully observed a few officers. He saw one praying to her God by clutching tightly on her cross, mouth moving to a whisper unheard to her peers. Another with his eyes closed and head shifted upward as if he was praying in silence. A slight nod by another officer; Les sensed an unseen presence was in the room. He focused on Lothar?s discussion but kept heed of these few officers whom he felt would be a problem. They were not proceeding with the new regulations and updated mandatory combat drills.

"You've just seen a series of videos of war among third world countries like Syria and Iraq," said Les. "Some heads of state are doing this to their own countries as a result of evils introduced by previous rulers. They enforce their dictatorship in their countries with such catastrophic events. It is time for us to reinvent our scare tactics to show these countries that we're ready for whatever they may have in warfare. Our country is known as the land of the free, and we are free to make our own decisions as a leader of weaponry.?

Some of the commanding officers nodded in agreement. Others stared intently at Les. All were alert, awaiting instruction at a moment's notice.

"Therefore, as you see this man, Salvator Lothar, is our next standing world leader. He has propositioned tactics for this special force to govern a safer country and a peaceful one. We have positioned each man and woman in this room to be the first to not only protect our country but to receive the implant?this delicate but powerful device?in your bodies. Here watch this clip..." He pressed the next button. He saw their approval nods as the general atmosphere changed, but there still were a few skeptics in the room. He dug deeper into his spiritual sensor and detected that some had Christian beliefs against this proposal of the biometric chip.

Les knew he had to set the example. He needed these men to not only respect him but fear him. The next chief officer and president of the United States would unite all the nations, and also would be willing to exterminate any that didn't follow his will. After the viewing, he glorified their role, ?So, you see how you?ll do a great deed for our country, and set an example for others.? He looked around, noting still a few who appeared to be resolute, and continued, ?We will become a safer nation. We won?t have crime or theft because the security measures will track every move someone who will harm us makes. This device, as you can barely see, is only the size of a mustard seed.? Staring at the woman who fingered her cross, he said abruptly, "We will not tolerate any moles, traders, or those who will not take the will of our Messiah." He heard an obnoxious sigh from someone in the room. His turned his head, and his eyes went to slits after targeting the perpetrator.

On an impulse, he considered the few soldiers he eyed earlier. He sensed their rebellious demeanors while listening to the demands with frequent twitches, holding on to their hanging cross necklace, or praying gesture. He knew they wouldn't follow the new order. This new mission assigned to him by Salvator Lothar could not fail. Taking matters into his hands, he yanked the gun from his holster on the side of his belt and shot each target quickly in the head. Blood sprinkled on those who stood nearby and on the video equipment near the control booth. Not a stem of remorse coursed through his body. Screams echoed in the room as the gun blasts rang in the ears of the remaining soldiers.

One of the soldiers stepped up to him and tried to stop him, asking, "Who is the Messiah? And why are you killing good men and women? Most of us are willing to do all we can for our country, including taking this device into our bodies..."

Les shot him in the face to stop him. Blood gushed all over the man?s army attire as he fell to the ground in agony, his breath gurgling through the blood pouring from his mouth.

"Now does anyone else have any comments?" Les fumed.

"Take him to the medical quarters. Get him out of here! I hope the rest of you make the wise decision, and this process will move steadily and painlessly. This proposal is the first that will take place and will become an imminent recommendation for this country to get on the good foot with our Messiah to come. Next, we will work to get ready to reinforce the biometric chip first in America using other tactics, and then many other nations will follow.?

The remaining officers listened quietly and attentively, with masked apprehension, lest they too become the next gunshot victim.

"We will split some of you in various sectors for varied assignments needed in the operation, and others will be in drills to acquire new war tactics. We selected each and every one of you, specifically, for the task at hand. Make us proud. You also will be paid handsomely, as you walk that way, and follow Dr. Whitbacker. Then you will receive a white form that will disclose your salaries and revised job descriptions under Special Ops governmental higher-ups," Les said in a commanding voice and pointed in Dr. Whitbacker's direction. Dr. Whitbacker stood upright with his hands on his sides as they buzzed him in, waving the others to follow him through the silver, secured doors.

Les was pleased the first order of affairs was finally happening, and he was easily wiping out those who would refuse. He contacted a clean-up team to remove these dead bodies and prepare falsified documentation to be logged in their secured database. After they finished, he would send out officers to report their deaths to their families.

review is posted on followings links:

Vera Book Reviews (all links below):

booksamillion will publish in 3-5 days 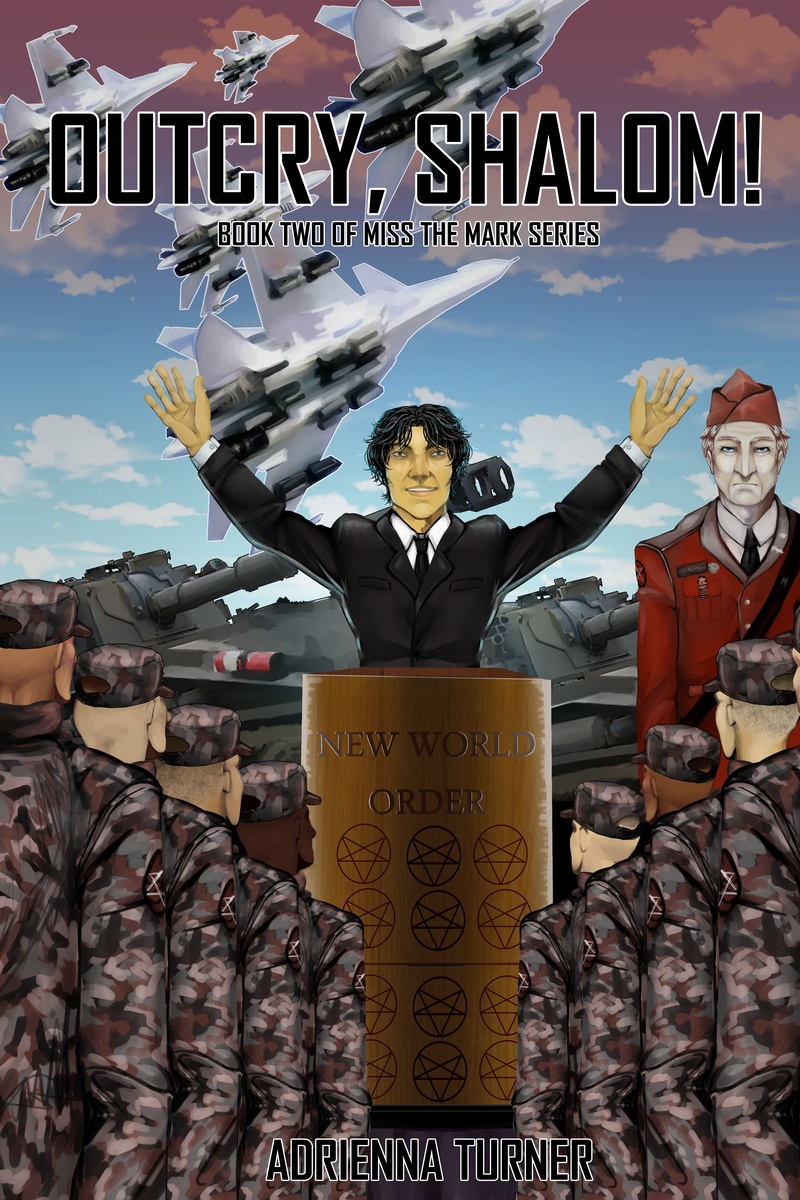 In Outcry, Shalom!, the second book of Miss the Mark Series, Satan secretly comes to Earth shrouded in a diabolical force known as the Antichrist. Hailed as the Messiah by many, he sets up a task force before his arrival. Many will cry out for peace once some of the task force has unleashed their power.
How will Roya Whitmore and her family handle the challenges as the epic battle for dominion between Satan and God begins to heat up?
Release Date: October 26, 2018

Available as eBook on Amazon.